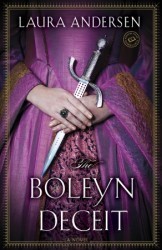 Perfect for fans of Philippa Gregory and Allison Weir! After presenting readers with an irresistible premise in The Boleyn King (what if Anne gave birth to a healthy royal boy who would grow up to rule England?) Laura Andersen returns in this deepening saga, into the dangerous world of the Tudor court, where secrets can bring down an empire, and even the strongest of monarchs may not be able to prevent history from repeating…

Henry IX, known as William, is the son of Anne Boleyn and now the leader of England, his regency period finally at an end. His newfound power, however, comes with the looming specter of war with the other major powers of Europe, with strategic alliances that must be forged on both the battlefield and in the bedroom, and with a court, severed by religion, rife with plots to take over the throne. Will trusts only three people: his older sister, Elizabeth; his best friend and loyal counselor, Dominic; and Minuette, a young orphan raised as a royal ward by Anne Boleyn. But as the pressure rises alongside the threat to his life, even they William must begin to question-and to fear….

I came across this eARC on Netgalley and was immediately intrigued. I love all things Tudors. Really. I have an entire shelf, maybe two, FULL of Tudor era books. I LOVE LOVE LOVE the Tudor family. Anne Boleyn is my favourite of Henry VIII’s wives. When I saw this alternate history aspect, I was so excited! I still have to read the first book, but I am so excited about this!

Why I need you to be excited
Um. Have you seen The Tudors? No? Well, go watch it. Get obsessed with all things Tudors. Yes? Well, come enjoy another Tudors series with me!