Today I am thrilled to be a part of the cover reveal for FAERY MARKED, a YA Paranormal Romance by Mary Waibel releasing this summer from BookFish Books. The cover was designed by the amazingly talented Anita B. Carroll from Race-Point.com. Learn more about the behind the scenes of this cover, as well as about Anita herself, at Waibel’s World.

Book Blurb:
No one ever warned her magic came with a price.
When Callie Rycroft wakes to purple flames on the ceiling, she discovers that not only does the Faery realm exist, but she is the human who must save it. Chosen as Champion by the Faery Queen, Callie is tasked with finding the Cordial, a magical elixir to strengthen the portal between the Human and Faery realms.
The upside? Reece Michaels, the boy she’s been crushing on for years, is assigned as her Guardian. Callie hopes by spending time together, he’ll start to see her as more than just his best friend’s sister.

The downside? She’s in a race not only against time, but another Champion and Guardian-a Guardian who stands to threaten her developing relationship with Reece.

Magic, mistaken identities, and hidden agendas are the least of Callie’s worries when she learns the Cordial requires a sacrifice. Will Callie be willing to risk all, even Reece, to complete her task as Champion, or will she let the portal fall, destroying both realms?

And now, the cover for FAERY MARKED. 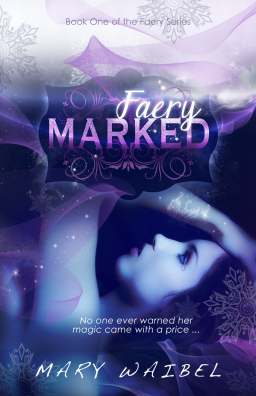 And here’ the entire cover: