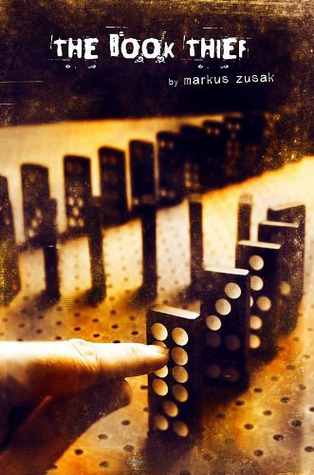 It is 1939. Nazi Germany. The country is holding its breath. Death has never been busier, and will become busier still.

Liesel Meminger is a foster girl living outside of Munich, who scratches out a meager existence for herself by stealing when she encounters something she can’t resist–books. With the help of her accordion-playing foster father, she learns to read and shares her stolen books with her neighbors during bombing raids as well as with the Jewish man hidden in her basement.

In superbly crafted writing that burns with intensity, award-winning author Markus Zusak, author of I Am the Messenger, has given us one of the most enduring stories of our time.

My Grandaddy fought in the Army in World War II. Reading books about World War II has always been a passion of mine. I will say that I have always read from the Allied perspective. In the last year, I lost count of how many times The Book Thief has been recommended to me. I was also interested because it was coming to theatres. I’m very insistent on reading the book before I see the movie. Luck would have it that Markus was coming to Dallas on tour. Luck would not be with me to remember to order a copy to get to Mary for her to get signed for me. Luck and hard work would have it that I won her giveaway! And then it sat in the TBR pile and sat and sat. It took commercials for the DVD to finally get the mood started. After I finished Allegiant, I was in a massive funk and decided to go with something older on the TBR to help kick it.

My favourite thing about The Book Thief was that it was narrated by Death. It’s a perspective I’ve never read before. It’s also a perspective that is perfect for a World War II setting. Millions of people died. Death was a constant.

I will admit, I wasn’t as blown away as I was expecting. Liesel’s younger years were a bit tedious to read. It started out slowly, but continued to get better the older Liesel became. It was very interesting to see how the Depression hit Germany. HIstory told by the victors always down plays the loser’s plight.

It never became a dash to the finish kind of book, but you could tell the action in the war was picking up and made the reading more intense. The details were down to the nitty gritty. It wasn’t Tolkien detail, but it was enough for a vivid picture of poor World War II Germany.

The characters are incredible. Though I wasn’t a fan of Liesel in the beginning. Not her personally, just the flow of the story in the beginning. Every character was real on the page. It felt like you could walk down the street and talk to them. I did really enjoy watching Liesel grow. She refused to let her initial ignorance remain a hindrance. She fought for every ounce of intelligence she gained. She was feisty and brave. Rudy was a great friend and fiercely loyal. I greatly admired how he immediately drew to Liesel and remained a great friend through thick and thin. I absolutely adored her foster parents. Her mama kept everyone at arms length, but loved wholeheartedly. Her papa was an incredibly loving and caring mad. Her reminded me a lot of my Grandaddy’s temperament. Max, the Jew that the family hides is a real and raw character. Death describes his regrets beautifully. The friendship between Liesel and Max is lovely.

The ending. Oh, the ending. It was just, wow. Even though Death tells you what’s coming ahead of time, it is still heart shattering. Roger Allam as Death was perfection. I listened to the ending on the audiobook and the sound of his voice as he told what happened had me in tears. It was a good thing I read the ending while the kiddos were napping because I was a sobbing mess!

Though I didn’t find it as spectacular as a lot of my blogging peers have, I did enjoy the story. I do recommend it for those who enjoy World War II historical fiction. Reading from the German point of view was very interesting and a learning experience for this this Allied soldier’s great-granddaughter.

Markus Zusak was born in 1975 and is the author of five books, including the international bestseller, The Book Thief , which is translated into more than forty languages. First released in 2005, The Book Thief has spent a total of 375 weeks on the New York Times bestseller list, and still remains there eight years after it first came out. Markus Zusak grew up in Sydney, Australia, and still lives there with his wife and two children.

One Response to “*Review* The Book Thief by Markus Zusak”