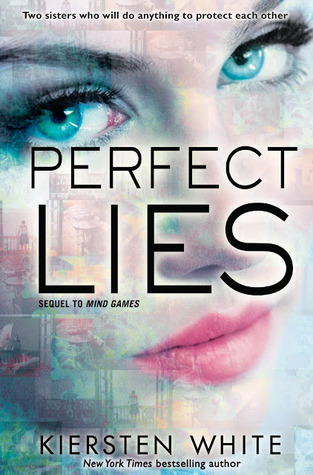 ***I was given an ARC in exchange for an honest review. Many thanks to HarperTeen!***

Summary:
Annie and Fia are ready to fight back.

The sisters have been manipulated and controlled by the Keane Foundation for years, trapped in a never ending battle for survival. Now they have found allies who can help them truly escape. After faking her own death, Annie has joined a group that is plotting to destroy the Foundation. And Fia is working with James Keane to bring his father down from the inside.

But Annie’s visions of the future can’t show her who to trust in the present. And though James is Fia’s first love, Fia knows he’s hiding something. The sisters can rely only on each other – but that may not be enough to save them.

My thoughts:
I received an ARC of Perfect Lies with an ARC of Taken from HarperCollins. I was excited because it sounded like a great read, plus it was a short book.

Right off, I liked Perfect Lies more than Mind Games. Not sure why, it just felt a little more put together even though it also felt more chaotic. I will say I don’t feel like things were wrapped up at the end.

Annie really blossomed in Perfect Lies and I loved it. I loved watching her realise she didn’t have to rely on Fia to function. I enjoyed her interaction with Cole. Their development in Perfect Lies was the best of the characters.

Fia really frustrated me. Her stream of consciousness was a whole bunch of crazy. It felt like the closer we got to THE event, the more unhinged she became. Her interactions with James were just off. With perfect instincts, I think she failed on that one. Ugh. I did love her interactions with Pixie, but much like Pixie, I found Fia to be very overwhelming.

The action and pace felt much more intense than Mind Games and one detail really kept you wondering until about 3/4 through the book. I was relieved how that played out, which really kinda surprised me.

The world building  continued to be nonexistent and it actually did bother me a bit this time around because the actions that were taken made no sense to me because we never saw what the world was like.

The snark was just as good, if not better though. I love me some snark! It just wasn’t enough to boost over the things that were lacking.

I did enjoy reading this duology, and Kiersten’s style has intrigued me enough  to check out some of her other works. I still recommend this duology because it’s a quick read and provides enough enjoyment to be worth the time. I’m undecided if I’ll reread this in the future. Maybe if I need quick reads to fill the time.

Hi! I’m the New York Times best-selling author of Paranormalcy and Supernaturally. I also give the most awkward hugs in the world. You should probably opt for one of my books over one of my hugs, but then again, maybe you like awkward hugs.

One Response to “*ARC Review* Perfect Lies by Kiersten White”