The Outlanders (The Fulfillment Series Book 2)

With King Jesper dead and Prince Wilhelm mortally wounded, Halfling prince, Nash, and the Fulfilment, Layla, assume the throne of Etherea. They must contend with a new Prophecy Candidate who asserts her position, and Layla is surprised to find her fate intertwined with this challenger. Facing a myriad of choices, Nash and Layla’s decisions affect not only their own futures but that of two kingdoms.

Unbeknownst to the Ethereals or the Vanguards, a slumbering menace stirs in the south, awakened after centuries of slumber. The mysterious Outlanders, a force shadowed in mystery, sit poised to tip the balance of power, sending ripples of fear throughout both warring kingdoms.

Elder Werrick proved a formidable foe, but Layla may yet meet her match in the monstrous Outlander queen. This mistress of the dark’s plans, rooted in revenge and ancient lore, now threaten the livelihood of all three kingdoms.

Racing against time, Layla travels to the Borderlands—home of the Voltons and Ecclesiastics—to discover as much as she can about the war, the First Ones, and the prophecy itself. Lives teeter in the balance, kingdoms sit on the cusp of ruin, and a beast, greater than any she’s ever faced before, plots a catastrophic attack.

Everything about Mia felt wrong. The girl, who looked so much like Layla, just happened to be where Samson could find her and came with him to the home of her enemy without any resistance? Whole generations of Ecclesiastics searched for entire lifetimes and never found the Fulfillment, yet Samson encountered two potentials in short succession. She couldn’t pinpoint the reason for her unease, but something tickled the back of her mind, inching toward the surface with painstaking sluggishness.
“I don’t understand why she would just come with you to Etherea.” Layla struggled to keep her voice level and calm to avoid raising Samson’s hackles.
“She didn’t have anywhere else to go. Vance killed her family in Vanguard.”
Layla made a mental note to confirm Samson’s version of the story with the information Nash managed to extract from Mia. “If she’s a Vanguard, why would she come with you to Etherea?”
“You came here,” Samson shot back, his inexplicable protectiveness for the mystery girl heightening her concern.
She treaded with care. “Well, some insane man in a black and purple robe stole my brother, so I didn’t really have a choice.”

I reread The Prophecy

right before I read The Outlanders so all the events from book one were fresh in my mind. I am very glad I was able to do that because I had forgotten more than I thought!

I was very happy to be back in the wonderful world Erin has created. I was very concerned for a certain prince’s life at the end of The Prophecy and very anxious to see his outcome! Of course, I was also concerned about the kingdoms as a war was on the verge of completely blowing up!

I really enjoyed seeing ALMOST the entire cast back for more adventures. (I won’t reveal who made it and who didn’t in case you haven’t read The Prophecy – go read it! – or in case you don’t remember! Perfect time to get it for 99 cents and refresh!) One of my few complaints is though there were more POV chances, I feel like more depth could’ve been added in some of the scenes. While the action is there and keeps you turning the pages, I kept a sense of things being rushed and not enough time was spent fleshing things out like Erin did in The Prophecy. Because of that feeling, I gave 4 stars compared to The Prophecy’s 5 stars last year.

With a bit more length {C’mon Erin! (; You dind’t HAVE to end on ANOTHER cliffhanger ya know!} and fleshing out, this definitely would’ve been another 5 star read. Both of those are PERSONAL issues, nothing to do with Erin’s characters/world building. I hate cliffhangers. I really do. Erin also knows that. (;

Even though there were many POVs, I still felt short changed (depth & length issue again). After the deep connection with the characters in The Prophecy, I felt like I was on the outside looking in this time. I also REALLY detested one of the new characters. Ugh. I was completely with Layla on that one.

I was pleasantly surprised at how quickly I was able to read The Outlanders. Both are interesting and quick reads, but my kiddos were not cooperative in my reading of The Prophecy last year and was anticipating a similar case again this year. I always tend to have a hard time with tour books cause the kiddos seem to have this sixth sense about tour books. They KNOW mama needs to read this book by a certain time so they go as bonkers as they possibly can. If I hadn’t started The Outlanders so close to bedtime and I didn’t have mama duties, this EASILY would’ve been a one sitting read. Even with my personal preferences, Erin did a fantastic job keeping up the pace and action to keep you wanting more.

I absolutely loved getting to learn more about the history of the kingdoms and Prophecy. I love how Erin laid out more world building in Etherea and introduced the Outlands.I wish she’d been able to reveal the history earlier or have more laid out after it in the book. Not happy with another year long wait with THAT cliffhanger. You’re killing me, Erin!

Overall, Erin has written another great book! She did a great job answering questions from The Prophecy while presenting more questions to keep a reader interested. I was left wanting more as a result of the way Erin presented the story and due to that AWFUL cliffhanger. UGH. STAAAAAAAAHP. I will again say that the length left me a little disappointed. I still recommend giving Erin’s series a look! Both books are quick reads set in an interesting world. Now, let’s have a look at the NEW cover for The Prophecy while I sneak to Erin’s and get her computer so I can see how things are gonna go down in book three! (;

NEW COVER!!! (print copies are in the works!) 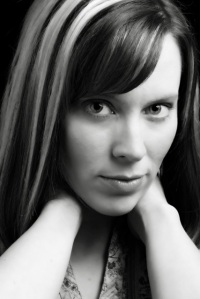 Erin Rhew is an author and fitness trainer. Since she picked up Morris the Moose Goes to School at age four, she has been infatuated with the written word. She went on to work as a grammar and writing tutor in college and is still teased by her family and friends for being a member of the “Grammar Police.” In her free time, Erin enjoys acting, running, kickboxing, and, of course, reading and writing.